All the fluffy pink lacy  cherry blossoms on trees  around, had me wistfully waiting for buds on my cherry tree, every single day  ! Finally they are here!

I am itching to weed and potter around in the garden , but I need to rest!  I hurt my arm a few weeks back and now although I am getting better,  I am trying not to overdo anything. So I sneak in a bit of crafting , and a bit of computer time between other household work.

Its very slow, but I’m grateful for what I am able to do.I was this close to going insane not being able to use my hands.

This is on my needles right now.The pattern I’m knitting is called  One Row  Lace Scarf.

The reason it has not grown much is  because I manage to knit about two rows in a day , which is completely fine right now. I’m so in love with this gorgeous  peacock blue merino/silk blend from Feather Brush Yarns. which I got at  Unwind Dunedin. The colour way is called ‘Tiara’.  Ofcourse I’m using my favourite Chiagoo needles.

I have it  all together in my hold and cherish project bag. I love this bag too. The beautiful saturated hues  from Kaffe Fasset is right up my alley. I just love looking at all the colours together.

Other than celebrating my birthday,  this month, I  also looking forward to the Secret Santa Swap .

As for the Secret Santa,now that the  Swap is over, I can show you the scarf I made for her and also the gift I received

I decided to start by choosing my yarn first. Since my swap partner’s favourite colour is purple, I went in search of a nice purple yarn.

Malabrigo Silky Merino with 50% Merino and 50% silk in Nocturnal  seemed like a good one.

When I checked Robyn Egge yarns website, it said that purchase of two or more skeins came with the pattern for the April Showers Scarf.  That sealed the deal  for me, cutting down on the  the wild goose chase for the perfect pattern as well.

Its the perfect marriage of yarn and pattern, with the slightly variegated colour way giving an interesting character to the flower like design. 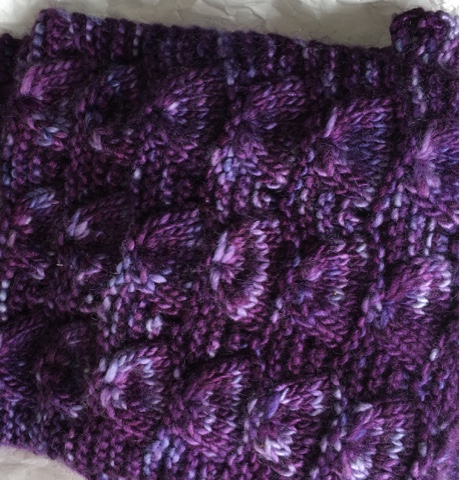 Once the pattern  started making sense,the project was a breeze and the end result ,very satisfying for me.The yarn is divine to work with.So soft and squishy.  I think the recipient liked it.

I  did not know who my secret santa was. But I love the gift I got.

A cowl. You all know how much I love my cowls .

I love colour and the textured pattern. So pretty!

How is the New Year going for you all? For me,the days seem  to be blurring away faster than I would like.

I’m loving that  its summer in January  in this part of the world. Warm and sunny and nice most of the days.

With Christmas done and dusted, it’s now time to wave 2015 goodbye. 2015 started out full of promise . I’m so grateful for the wonderful things that happened throughout the year that is now fading away fast.

Straddling between different cultures, it has not been an easy ride but I’m so proud of all of us for hanging on . There were tears and tantrums from all of us at some  point or other . Now they are memories we laugh at together, ‘Remember the time when?’

I’m so thankful to God for placing people in our lives who have helped us knowingly and unknowingly through these trials.

Things that make me very happy and grateful this year :

Craft wise,I’ve enjoyed working with NZ wool this year .  Going by the collage,I feel I have been very productive this year, I’m pleased that I have also used a lot of yarn from my stash.

These are my absolute favourites.

Praying that 2016 will be year of blessing ,happiness, peace and the knowledge that our sovereign God is in control at all times.

Romans 8:28 And we know that all things work together for good to them that love God, to them who are the called according to his purpose.

How has your crafty/personal year been? What are your plans for the new year? Do share.

One thing that has been rubbing my colour loving brain the wrong way ,is the lack of colour around me.Give me the blinding neon red orange with  copper sulphate blue flower lungis and sarees please,I miss them in this sea of muted shades, blacks and greys.

This must be the reason I find myself  drawn to bright colours ,unconsciously.

Ironically, I preferred lighter colours much to my mom’s angst, When I lived in India with her.”Choose bright colours please”, she would nudge me and I’d stubbornly pick a cream or beige saree.

My brother and I rolled with laughter at those very red orange with copper sulphate blue flowers lungi, we spotted people sporting. Little did I know, it was all going to come and bite me in the back, with me longing to see those exact colours around me!! Funny , no?

Winter projects are coming off my needles one after the other. I may not need it now, as Spring has given us some glorious warm sunshiny days… still its good to have them handy.

I prefer cowls to scarves because of how fuss free they are around the neck. You don’t have to keep adjusting them. They keep the neck warm and they are quick knits. Makes one feel like a very competent knitter, you know. Churning out FOs in half the time it would take to knit a shawl or a scarf even.

The pattern , the yarn and the needles are all same as this cowl, just the placement of the chevron is Missoni inspired .

On my Hook and Needles are two easy to memorize projects.With a huge move looming in the background,and all my craft stuff packed away… I’ve just put aside enough yarn for two small  projects to work on ,(one crochet and another knit) when the itch to work on something strikes .

The first is the Isar Scarf… which I’ve been working on  now and then,while driving around in the car doing last minute shopping.A serendipitous discovery happened by the way ,I’ve used the same colours in this skein for my runner previously.

the other is the One Row Lace Scarf. I absolutely love these needle I’m using for it.- addi needles .

I started this  project with much trepidation.I am so happy to report that turned out to be one of the most enjoyable knit for me.

After I showed my work in progress , I ripped it out when I realised that I would run out of yarn.I considered ordering more but it is all a  tedious process for me .

I am pleased that I was finally able to complete it just the way I wanted it.

I haven’t blocked it and donot plan to do so yet.I like it just curly and all.

I love this yarn too, its soo soft and most importantly not heavy at all to wear.

A simple stitch and a beautiful result, I cannot tell you how much I ‘m enjoying this knit . The increase part is over. I have now finished four repeats of the straight part.This is the last skein I have and I’m keeping my fingers crossed, it will be just enough to complete the scarf the way I want .

If there is something called pattern stalking, then think  I’ve done to the max with Saroyan.I was so completely smitten by it and also extremely intimidated by it. Eventually I just decided to give it a go .Every time I take it to knit, I always find myself shaking my head in disbelief at how simple it really is and how I’d been intimidated for no reason at all.

A rush of new beginnings is happening here. It always gives a new excitement, rt? Much anticipation of a new FO and lot of dreaming in between 🙂

There is a little baby hat on my knitting needles right now.

All I could manage to get was a 40cm-2.5 mm needles .But no DPNs to match it.I decided to get them anyways.

I’ve cast on for this ribbed hat pattern.I’ve Cast on 108_ more stitches than the pattern called for.

I’ve never knitted with needles this tiny and it  feels like I’m knitting with a couple of skewers.

There’s something new on my Crochet hook as well. I just started the Angel Crochet Scarf , simply because I wanted something simple, quick and pretty to crochet . I did not realise that it was written in British terms until I worked up  about two rows . Somehow the stitches seemed too big for my taste and then I checked notes on Ravelry which said it was written in British Terms. Ah! that made sense.Now I’ve ripped it and started again.

I’m using a Denim yarn that I used for this bag.

I got completely confused by the dtr / tr thing that I had to check a couple of videos to get my stitches right again! :))

M had been bugging me to let him use my Acrylic paints .They have been just sitting there for more than a year.Secretly I was delighted but did not let it show.He got up bright and early, rushed through the morning chores and rushed me through mine .Finally we sat down .

He loved it !. Then it got too much and we ‘ve wrapped it up. It was so much fun while it lasted!